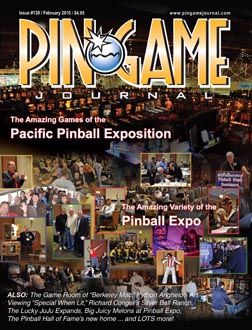 Stern's newest sports themed offering is our first re-running of an older title since Jack-Bot. Despite something old being new again, Stern may have actually come up with a good combination of playability, competitiveness and license.

Inside the pinball collector community, basketball is not a popular sport. From Harlem Globetrotters to Hoops, Shaq Attack to NBA: Fastbreak, basketball themed games are not greeted by the same fan fare despite how well the theme translates into pinball rules. However, for those who are both fans of Pinball and Basketball as well as new potential players, NBA may be the quirky gimmick that brings quarters back to the operator's coin box.

The NBA graphics does depict some fresh talent like Dwight Howard (Orlando Magic) but I would have liked to see included some up and coming talent such as and Joakim Noah (Chicago Bulls) to lengthen the game's appeal. The players chosen by Stern are of little importance to the pinball game and are only there for recognition by the casual NBA follower. Similar to the last basketball offering, you choose the team you want to play. However the purpose of that procedure ends at telling the game what player's names to use in the speech calls. There are no team high scores to try to beat or any other records to make breaking the game out by teams, significant.

The playfield is a modified version of Space Jam, with some features removed for obvious cost reasons. The basket skill shot is no more, so is the wickedly cool ball lock that Space Jam offered with its ball grabbing magnet and dual habitrail. The playfield art has become what is the most basic rendering produced to date. The single color with player images cut-n-pasted seems overly simple when you consider the decent look of the cabinet art that is a perfect complement to a sports bar. However, if you are thinking NBA is nothing but your basic re-theme, then there are some nice surprises that await you.

What did stay from Space Jam is the jump ramp to the backboard where a magnet grabs the ball and releases it to fall through the basket. NBA offers two other shots to the basket: the free throw saucer and (thanks to a skip ramp) the fire ramp now also feeds the basket. The biggest surprise visually is the saucer that can make free throws. Instead of your everyday eject, the ball is launched toward the basket. The fire ramp will award your 2-point shots and the original jump ramp to the basket is how you score 3 points. While the game will score your progress using traditional pinball scores, the basket ball score is used to reach the objectives of lighting Extra Ball and Special. If you are concerned about the reliability of these mechanisms on location, there is an opto under the basket on the ramp that as long as it is triggered, credits the shot. In addition, the game recognizes made and missed shots as the switch handling on the ramp is well coded.

Of course in every (NBA) basketball game there is a nemesis, a foe, someone you need to be able to beat, but challenges you to step up your game. In Stern NBA that nemesis is the spinning basketball disk in the center of the playfield. When in motion, the ball likes to take on the crazy English that drove us nuts when The Power was on in Pat Lawlor's The Addams Family. The disk has the biggest influence on balls that roll slowly out of the jet bumpers and in most cases will require a good slap save to prevent a drain between the flippers.

Now, I personally have never been a fan of the theme of Space Jam, but the playfield offered a number of satisfying shots that produce a well flowing table. All of that flow has been preserved in NBA by maintaining the speed inducing orbits, a quick ball rebounding captive ball and a diverter that will feed the ball to the appropriate flipper to pull off successive field goal shots. The person who makes the most free throws, 2-point and 3-point shots gets to enter their initials at the end of the game. In addition, you will need to complete the Triple-Double which in Stern's NBA is a 3-way combo of all the field goal shots. The diverter will help set you up for this objective as well.

The one area of the playfield that needed to be addressed from Space Jam was the placement of the stand up targets. In NBA they have been replaced with ?All Star? stand ups, which are tucked out of the way but interrupt what would otherwise be a completely smooth layout in terms of pinball geometry. I feel this is a design flaw keeps NBA from being a great game as you are required to hit these targets often to light All Star modes and they are not placed in a manner that makes them accessible from the flippers. Your best bet at hitting these targets is off a missed-shot bounce.

Don?t let the basketball names of these ?All Star? modes fool you: All Star Shootout and H-O-R-S-E might not sound like much, but the implementations of these modes are a blast to play and a great challenge to your pinball skills. The modes do mix up the rules not only between timed play and multiball play but vary the required shot process giving each mode its unique feel. Add to that the 3-bank drop targets which, when completed, start timed periods in which all scores are doubled. A good stack here can be rewarding. Hitting the orbits in a consistent manner is a needed skill as this is where the Fastbreak Hurry-up lives. Once Fastbreak is started, it isn't a one-shot and done mode. Collecting one hurry-up starts a second at an even higher value.

Another misleading mode will be the NBA multiball. While its name lacks inspiration, the requirements to do well rival those of Creature from the Black Lagoon. It starts with your ability to hit each of the field goal shots. Not until you accomplish that, are the remaining shots lit and must be collected to merely light the Superstar target. It is the perfect level of depth that leads the player to believe it is easy, but in reality is a true test of ability.

In order to compete for the NBA Trophy you need to accomplish a number of objectives. These objectives require use of all the playfield shots including combinations, repeated orbit shots, mastering the multiball and the correct number of hits to the jet bumpers followed by the captive ball. Unlike previous Stern titles, ball times are more comparable to those of the Williams/Bally games from 10 years ago or in a single word, short. I found this to be both frustrating and welcoming at the same time. To have a good ball on this game results in a feeling of accomplishment. It also isn't easy to get your initials on the high score to date table, even on a game with factory fresh default scores. In a recent tournament that was held at the same location where I play, my third place score of 39 million held up against the more skilled players who competed.

The last thing to keep in mind is that your progress in the game is continually rewarded in the form of the bonus. As you play, you build stats that translate to points in the bonus countdown. You multiply you bonus by completing the in and out lane rollovers and high multipliers will be very rewarding. Therefore it is necessary to continue to master the art of the lane change as you have done in some favorites like Attack From Mars, Terminator 3 and Medieval Madness.

While brining a quick game to market by remaking an old title, Stern managed to produce a game that has an addicting quality. The background music is not bad but the announcer who provides the game commentary sounds flatter than I would have hoped. This is one of the signs that show the hard economy and its effect on game development, but importantly the game play (playfield and rules) is entertaining enough to keep me coming back for more. Recently I have found myself playing NBA more than the previously released 24. If the goal is to get pinball machines back on location and grabbing quarters, this one may just do that. Its general license allowed Stern to be creative with the pinball rules while the NBA angle should get some new players to give the game a look. To top that off the game play and nice rule balance should get new and moderately skilled players to come back for more. If I was with friends at a bar, I can easily see challenging them to more than one game of NBA.